Launch of Michael Longley’s The Stairwell

There was a thud and a fizz and white foam sprayed all over the crowd around the wine table.  There was no champagne to mark the launch of “32 County Poet” Michael Longley’s tenth collection, The Stairwell – this was a toppled two-litre of 7UP – but the accident was in the spirit of cork-popping and it set the tone for the rest of the night.

With Yeats Society President Damien Brennan as Master of Ceremonies of the 7pm reception, things were bound to get bubbly.  He began by acknowledging Michael’s wife Edna Longley, who that morning had delivered a lecture at the Hawk’s Well on Yeats, Joyce, and the 1890s.

“Can you imagine the bedtime thoughts they have together?” he asked.  And I suppose we couldn’t help but wonder.

Brennan also referenced Postscript, Saturday night’s tribute to Seamus Heaney, at which Longley spoke.  Brennan was hardly the first to note, then, that Heaney was born in 1939, the Year William Butler Yeats died, at the age of 74.  Heaney died in 2013, also at the age of 74.  Last week, Longley turned 75.

“You’ve made it past the post,” he told Longley, to shocked and not-so-shocked guffaws.

Brennan’s is always an interesting act to follow, but Longley earned more laughs.  He told about his father, about meeting the British Queen, and about “Lauren Bacall, who had a walk-on role in my fantasies.”  (Perhaps he was thinking about the unforgettable line from To Have and Have not?)

Though he has made it past Brennan’s “post,” Longley didn’t seem to be counting.  His new poems in The Stairwell dwell on death – his own and the deaths of close friends and relatives – but they aren’t “last words.”

“The next poem is what matters,” he said.  “It’s the only thing that matters.” 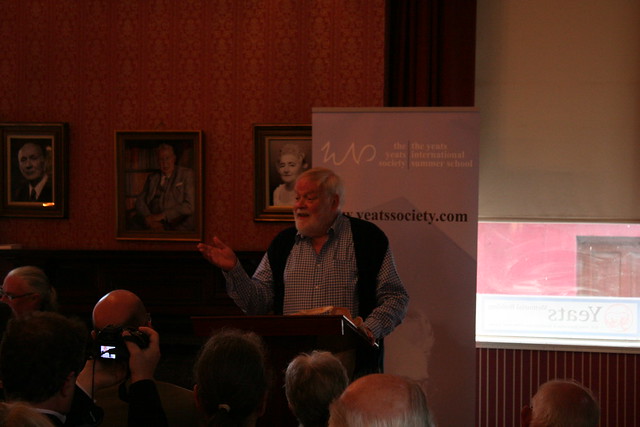 At 8pm, at the Methodist Church, summer school Assistant Director Matthew Campbell re-introduced Michael Longley with a selection from his new book – the one phrase that makes any new volume of poetry worth the price of admission.

“Bone shapes out of our gloomy womb-tangle,” Campbell recited, a line from “The Feet,” a poem about Longley’s late twin brother Peter, dedicated to Peter’s widow Catherine.  “An experience that has found its words,” he called it – something Longley’s been giving the poem-reading public with regularity for the past fifty years.

Many of the poems were somber and elegiac (though Longley asserted that elegies were balanced by “birth poems”), but not matter the subject, the laughs didn’t stop.

He read through a brisk selection of poems from The Stairwell as well as three unpublished poems,
“only a few weeks old.”

“A lot of my poems are short.  I think most poems are too long, really,” he said later, in his dry, clipped deliver, something like a Belfast Dumbledore.  “ I have a one-line poem,” he said, and read it.  “They’re making a movie adaptation.”

Longley, like Yeats, has a mixed poetic, political, and familial heritage, both Irish and Anglo, sometimes both, often neither.  Longley claimed Yeats as the greatest English-language poet after Shakespeare, and of course had to qualify this: “He could be so foolish and silly, and that moves me too.  A great man making a fool of himself.”

“It’s amazing writing poems at 75 … and feeling that I’m only beginning, you know,” Longley told his audience as he began to wrap up.

After fierce applause for what could have been Longley’s final poem, Campbell took the podium and coaxed him into an encore – not a task, given the crowd, and given the poet.

“I forgot a poem,” Longley said, and after the applause died down, he began again.

One response to “Launch of Michael Longley’s The Stairwell”