Jack B. Yeats at the Model Gallery

Few people get to see the work of Jack Butler Yeats in a collection as large and well-selected as the one currently on display at the Model gallery in Sligo.

The collection, up 31 May 30 September, intentionally coincides with the Fleadh Cheoil: all the works were selected to demonstrate “music as a key device in his painting.”

His use of horses and circus figures as subjects suggests an interest shared with Picasso, at least in his Rose Period, but continental artist Yeats most resembles is Oskar Kokoschka.  Though his early works draw on pastoral themes and subjects, he showing an early but muted Expressionist influence, his work after 1920 soars, using new colors and subjects and daring to swell up off the canvas like frozen oil flames.  The strokes become so thick at times that Yeats is not so much shaping color as working matter into the shapes of colors, as he moves from representational Expressionism to emotional Expressionism.

The paintings show an Ireland dynamic and set to music made physical on Yeats’ canvasses; and his later work takes the gallery-goer into World War II and the unsettled times around it – turbulent canvases dark with detail eluding definition, cut by sharp flashes of light.  Visitors to Sligo in the next month and a half shouldn’t leave town without seeing this. 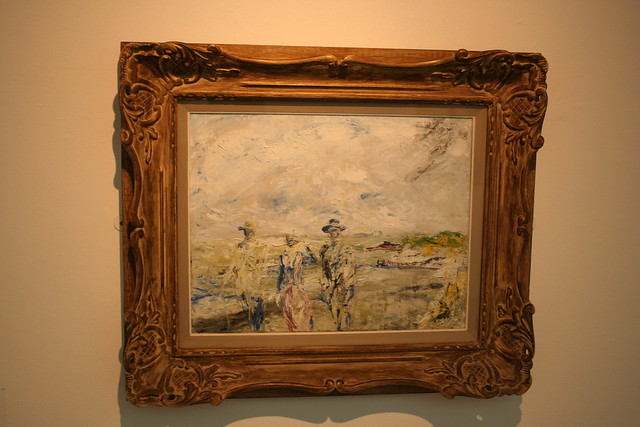 [You can find more Jack Yeats pictures in my Sligo Flickr gallery here.]