While staying in Góra Świętej Anny (St. Annaberg), a hill-town of 580 souls in Silesia, Poland, my traveling companions and I decided to take a day-trip to Kraków.  The pierogis, we were told, were filling; the women, beautiful.  We’d traded our euros for Polish złoty, and the royal city called to us like dark post-Communist playground. 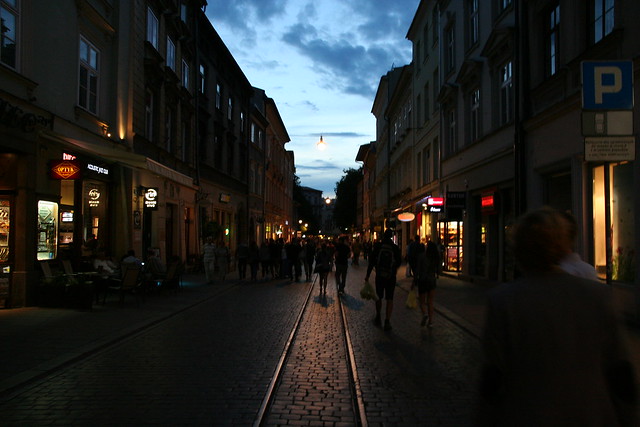 We arrived in the mid-afternoon.  The hour-and-a-half drive from St. Annaberg was lengthened considerably by the Polish tolls, which have about the same effect on traffic flow as would massive craters opening up in the pavement for 800 metres at a stretch.  There is no Polish “E-Z Pass,” no way to avoid slowing, stopping, handing 9 or 11 złoty to some toll-taker and waiting for change.  Hundreds of cars stand at these tolls at complete standstill; we never waited less than 15 minutes, and often waited longer.  In 154 kilometres we endured three tolls and paid 25 złoty – I flew into a righteous fury (what the Germans might call Fuchsteufelswild), until I realized that this was equal to 5.94 euros.

I completely forgave the Polish bureaucracy by the time I bit into my first pierogi, at Dynia Resto Bar on ul. Krupnicza, a modern restaurant and cafe (and favorite of the locals) with a spacious, quirky pleasure-garden and top-notch menu.  We started with salmon bruschetta and moved on to pierogis, both meat and Russkie.  (Hand-rolled, baby.  I needn’t say more.)

Thus fortified we set out for the most obvious tourist attraction: the Wawel Castle and Cathedral on the Wisła (Vistula) River.  (Although, we did take a pit stop at one of the floating bars that line the banks beneath the castle, to try Tatra, and one or four other Polish beers.) 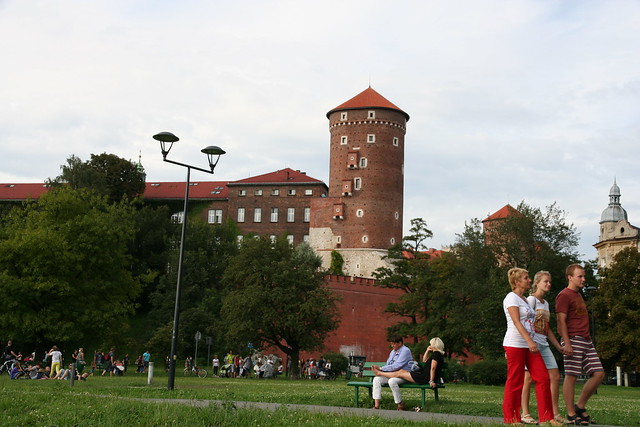 Built in the mid 1300s, the castle and its sprawling additions now house one of Europe’s more important art museums, though we arrived too late to see this.  We were also denied entry into the cathedral (pictured in this page’s header), which is an absolute confusion of architectural styles, Gothic butting up against Romanesque, with Baroque cupolas and the Renaissance Sigismund’s Chapel glistening below.  Strangest of all was the Gothic western entrance, where, above the left side of the tall doors, dragon bones hang suspended from short chains. 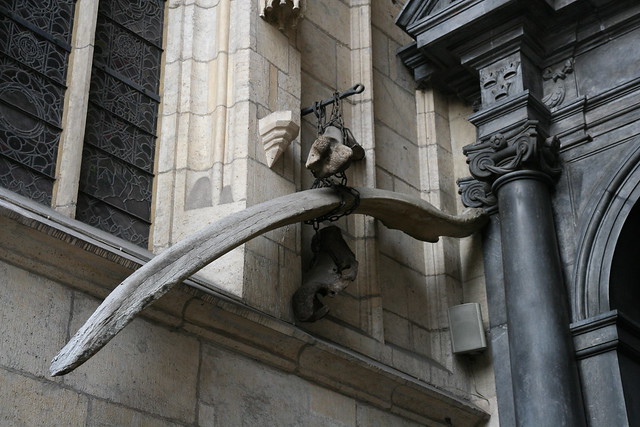 The Wawel complex entombs Polish kings and saints by the dozen, but the most famous bones are these, supposedly belonging to Smok Waweleski, a dragon that ravished lambs and virgins until a Polish hero killed him; the castle is built over Waweleski’s cave.  Whether the spars and knobby knuckles hanging above the cathedral’s western entrance are from a dragon or from a mammoth or a whale, as some suggest, I still found it incredible to walk up to these bones, not replicas, hung so casually by the side of a church door, which inspired the founding myth of one of Europe’s oldest cities.

Naturally, though, such awe tired us out: we needed to stop for another drink.  On the advice of Matthew Mullin, a friend from Canisius who had been studying Polish in Krakau for the previous month, we headed to the Kazimierz district.  We wandered for a while, over a pedestrian bridge with Polish lovers’ locks, until we found Eszeweria, on ul. Józefa. 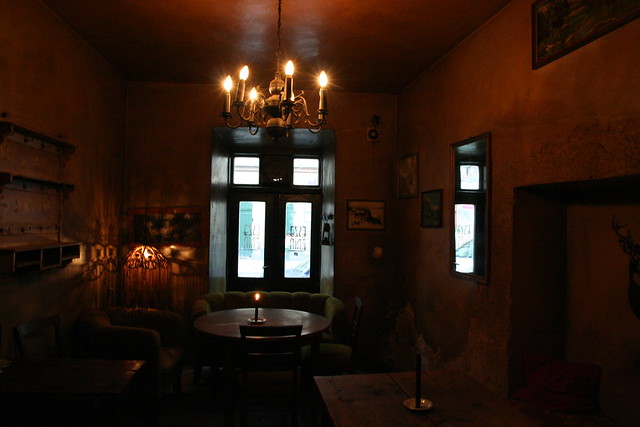 The place is conspiratorial; it’s dark and creaking and composed almost entirely of corners, nooks, low couches, and odd beds; the entire scene is lit in scores of candles.  The backyard is brighter and quite spacious, but despite the good weather we were drawn inside, into the dark.  It was here that I reflected on the strangeness of Kraków.  I joked through the day about the city’s post-Communist feel – I mean, public restrooms have closing hours – but this is only a half-joke.  Matt told me that no one over the age of 60 will smile – and he was right.  The young people, meanwhile, wore faces painted in the makeup of melancholia – as Steve put it, looking “like every one of them had just left the wake of someone they didn’t know.”  That isn’t to say the people are cold; but one gets the feeling, looking at a beautiful girl with blonde hair with dark lowlights of sadness, burning some funereal cigarette, to tell her about the wild and funky world outside Kraków’s gorgeous, graffiti’d, grand and gloomy architecture.

(Somehow I left the city without holding such a conversation, without spreading this good word.)

The night was wearing on; after lingering in the Rynek Główny, a medieval market square cluttered with clapboard shops selling furs and leathers, filled with pleasantly bored spectators watching a pleasantly boring guitarist on a lit stage, we had a final drink in the PIEC Art jazz club: you can smoke inside, and the Hungarian wines are pleasing, if not of a remarkable vintage.  We were too early for the show; but someday, when I revisit Kraków and have time to indulge in the jazz scene, I’ll be back to this cozy basement club.

Kraków is a beautiful city in many ways; I saw only a fraction of it.  It’s cheap, it’s filled with beautiful people, and every other block, I’ll wager, hides a gem like Eszeweria or the Dynia Resto Bar.  If you want to taste Eastern Europe, this might be a good place to start. 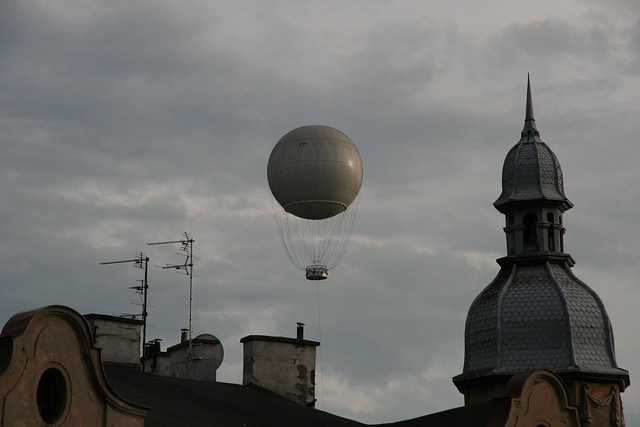 [You can find more pictures of Kraków in my Flickr gallery here.]

One response to “Strange, Beautiful, Shabby, and Grand: The Rich Melancholy of Kraków, Poland”