I tried Gose beer on my first night at the Village Beer Merchant, Buffalo’s premier craft-beer store and one of the epicenters of the growing “drink (and brew) good beer” movement in my hometown.  The brew is classified as a sour wheat beer – but unlike the sour Belgians, this one is brewed with salt water.  Vinny, one of the managers and beer sherpas there, was trying to expand my understanding of the possibilities of beer as an art and a taste-experience.  So he cracked a Stillwater/Westbrook “Gose Gone Wild.”  Sweet – Sour – Salty – this beer rocked me.  So when we passed through Leipzig, Germany, on our way home from Poland, I knew that I had to try a craft Gose beer in that rare brew’s home city.

If I lived in Leipzig, I would probably spend many nights at the Bayerisher Bahnhof Gasthause & Gosebrauerei.  The place is massive, with plenty of indoor seating, and enough space available outside, in the tree shaded and gravel-lined biergarten.  One will ideally visit with a smoker, who will leave his or her cigarette stubs smoking on the ash-steins like joss sticks.  The food in the biergarten looked so delicious that I was tempted to stay for dinner – but after a few half-litres and a soft pretzel, I forgot about the steaming plates being carried to this or that table around me.

Naturally I started with the Original Leipziger Gose.  A cloudy sour-style weiss, the Gose wore a textured head with champagne-like bubbles and lacing.  The aroma was faint, and the taste was likewise subtle – surprisingly so, as my only Gose experience at that point had been with Stillwater’s brew and Anderson Valley’s Highway 128, which are (typical of American beers) bolder, boozier, and brassier.  But this Leipziger Gose was undeniably more refined. 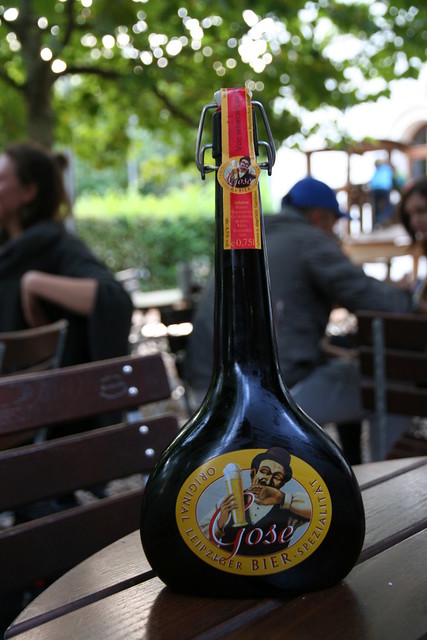 Lightly lemony; impertinently salty; delightfully sour.  The Gose has hints of yeast, and because of the subtle sourness, you can more easily appreciate that this is a weiss-style beer, something lost in the American homages.  There isn’t anything missing in this beer – but it leaves you wondering if you did miss something.  The taste is elusive; “It tickles you to want more,” my friend and traveling companion Matthias Spruch said.

At the end of the half-litre, I found the Gose highly refreshing, in the same league as some of my favorite German weiss beers – although I wasn’t satisfied; the salt might have contributed to its addictiveness.

We moved on to the Kuppler Weissbier, paired with another pretzel apiece.  The Bayericher Bahnhof brewers know how to make a refreshing summer brew – but the similarity that this beer bore to the Gose left me underwhelmed.  There was again a subtle yeast flavor (all beers at Bayerisher are served unfiltered), and light summery grains, ending in a sharp wheat edge.  I took deep draughts and set the glass down to watch faint bubbles lace the deep golden body, darker than the Gose.  (And – perhaps this was the result of some Gose aftertaste – I felt that the Kuppler, too, had a touch of something sour.) 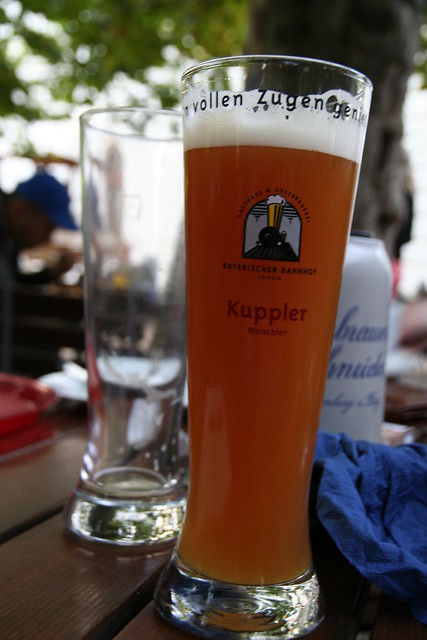 Matthias thought the beer was “Tremendous”; Steve thought the Gose was better.  “It’s like a skinny flat chested anorexic supermodel,” he said – “The Augustiner Weissbier is Kate Upton.”

The Kuppler did win my heart, for its subtlety, style, and satisfying finish, but I saw Steve’s point – there are better weissbiers, and at the top of my list, the Augustiner Weiss still reigns supreme.

Finally we tried the Heizer Schwarzbier – something to warm us as the sun set.  I realized with the first sip that subtle really is the preferred mode of operation at Bayericher Bahnhof.   The malts give this a full body – and a wonderful aroma – but the taste is velvety, and agreeable.  There was very little hops, and I would have preferred more – but the brewers do advertise this one for patrons who can’t stomach bitter beers.  It was a good beer on which to end the night, but for me, it was the least impressive of the three. 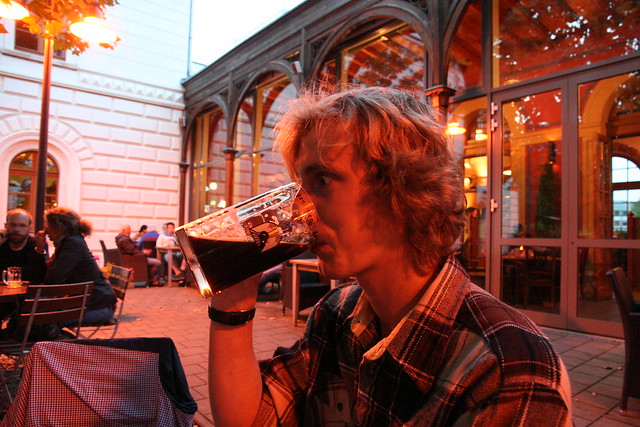 I left the brewery with a better understanding of what divides American and European breweries.  For the most part, the Europeans are traditionalists: that’s why really good IPAs are rare, and why lambics and great golds aren’t brewed outside of Belgium.  But the Americans, in their orgy of ingenuity, always err on the side of bigger and bolder.  So, our IPAs are the world’s best, and our Belgians can compete with the style’s home country.  But when it comes to subtle beers – like the weiss and the pils – we barely make a showing.  The Gose beer falls somewhere in the middle.  The style begs for boldness – and that’s why the “Gose Gone Wild,” with its citrus flavors and (in America, almost obligatory) hops, remains the best Gose beer in the world.  But the Leipziger Original holds a special place on my palate.

2 thoughts on “Today’s Brews: Gose and Other Beers from the Bayerischer Bahnhof Gasthaus & Gosebrauerei”