Visiting two wonderful widows in an apartment in Scharnhorst, a northeast district of Dortmund, Steve and I mentioned to the hostess – Oma, eighty-five and able to make a man reach unwilling for a fourth helping with the smallest flick of her index finger – that we’d been to the Museum Ostwall in the U-Building at the west end of downtown Dortmund.  Oma scoffed.

There was once a work in a contemporary gallery, Oma told us (she didn’t say where, or whose work) that consisted of a blank canvas with a subtle grease-spot just slightly off-center.  One night a cleaning lady, unable to identify the stained canvas as art, washed out the stain and replaced it on the wall.  The woman was fired – although I had to wonder how long the museum staff took to notice that anything had changed.

Apocryphal or not, the story hit home.  Steve and I had experienced our own “grease stain moment” the day prior, in the museum Ostwall, on the 6th floor of the Dortmund U-Building.  We stood in front of a room full of forks.  Forks and spoons.  These were strewn liberally between three barbed wire fences about six-and-a-half feet tall.  To our right were two suitcases, which (yes, I picked them up) felt empty.

“I think we’re supposed to walk across,” I said.  “Like it’s one of those interactive things.”

But neither of us moved. 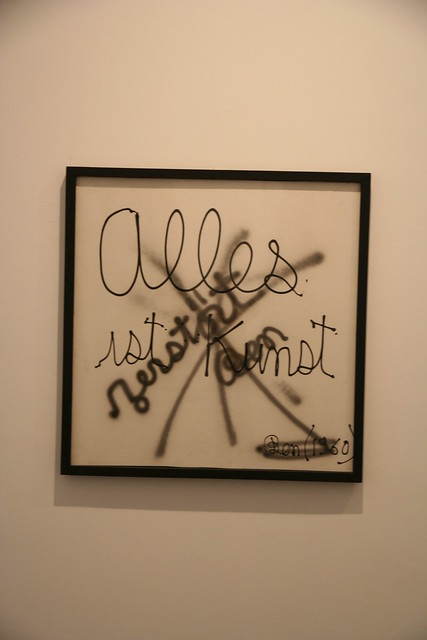 We had doubts.  We’d not seen anyone else walk across.  And we didn’t see any point in walking across, because there wasn’t anything at the other end – just an unsavoury gray couch.   In the adjacent hallway hung a picture of an asexual Soviet-type figure carrying one of the suitcases and walking across the spoons.  It could have been an example to follow – but something in that black-and-white androgynous grimace didn’t feel like an invitation.

Still undecided we circled around to the opposite end of the fork-and-spoon affair, in the room with the couch.  There Steve spotted a tiny message on the wall.  With a grasp of the German language limited to “essen” (food) and “gut” (good), among other unpublishables, we had no idea what the message said – but it was in italics, and ended in an exclamation mark, so our rough translation looked something like “don’t put your imperialist soles on my silverware!”

So we let the utensils lie.  Feeling some faint obligation toward anarchy in my American blood, I nudged one with my toe before we left.

Unfortunately, this experience – disappointment, a bit of resentment, a dash of disgust – could sum up the hour or two we spent at the Museum Ostwall.

The fare was pedestrian at best – canvases with crude scrawls of “Alles ist kunst” (everything is art) or a piece of paper declaring with Nietzschean certainty that “Form is void.  Void is Form.”

All very good and well in some blowhard pamphlet published by an artist-cum-critic – but this sort of thing underwhelms on a canvas. My problem wasn’t that I disagreed, but that I was bored.  And so we walked past potato sacks left on the floor, globes of LED lights that I swore I’d already seen in late-January Christmas Tree Shop end-of-season sale, a square red canvas next to a square blue canvas (that I swore I’d seen … everywhere), a video of a Freya Hattenberger performing lackluster fellatio on a plastic-wrapped microphone, and we understood it all.  Understanding the “statements” wasn’t our difficulty; but we gave appreciation (forget awe) the old college try, and came up short.

By coincidence, a day or two before our museum visit one of the most liberal people I know sent me an article titled “Liberals Are Killing Art.”  The article doesn’t criticize artists so much as their gatekeepers – the gallerists and the critics – and even the defenders of art.  Those who defend art as a means to some social or political end, the author, Jed Perl, writes, cheapen art and rob it of its transcendent power.  He quotes Paul Goodman:

“…’the plastic arts, drawing and painting and sculpture, cannot become minor arts for they demonstrate perception, how people can see and are to see; and so a people’s music is its kind of feelings.'”

Places like the Museum Ostwall enshrine a mode of perception that I’d liken to a hall of mirrors facing the artist, a tenor of feeling that can only be called shallow and tepid.  This is the gallery of an atrophied culture, and atrophied kunst.

At our most downhearted, Steve and I walked into a room full of Picassos, Beckmanns, Mackes.  And we were awed. 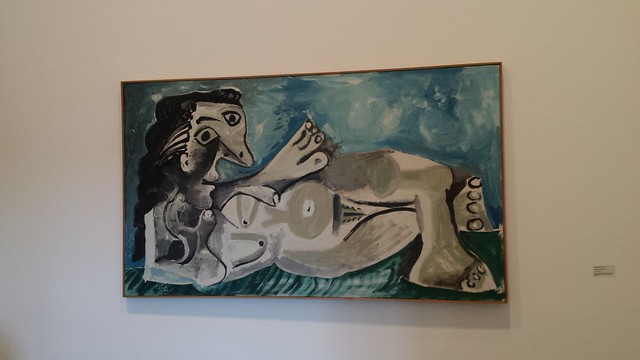 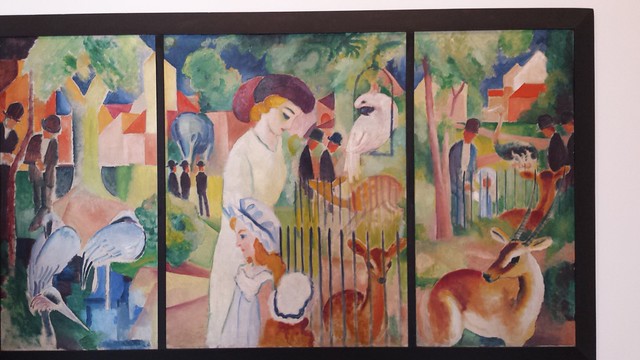 I think the salient difference between people like Picasso and people like, say, Freya Hattenberger, is that the former presents a vision of reality, some mode of perception, feeling sublimated or transformed or expunged.  The latter falls into a broad school that expresses mere ideas.  “Anyone can have an idea,” the Museum Ostwall’s website says, as the tagline of its permanent collection.  This is true enough.  But art has never been made up of mere “ideas.”

As you’ve probably noticed, I took several pictures in the Museum Ostwall (you can see many in my Dortmund Flickr gallery).  Twice, though, the museum guides skittered out of their holes and crevices to chastise me.  In my defense, I had no idea that I was being told not to take pictures the first time.  The second time, in the museum’s sole room devoted to aesthetic expression, the guide caught me again, snapping a picture of a painting by August Macke.  I was offended, too offended to argue that no argument could sway a reasonable being from taking (non-flash) photos in a gallery – but not too offended to chuckle quietly at the fact that, in a museum so democratized into baseness, some fascist impulses persisted.

So we left.  Before we took the elevator down, however, we stopped at a viewing room that we had spotted while inside the gallery.  It faced east, out into downtown Dortmund, under the best and clearest midday sky we’d seen since  arriving here.  There were beanbag chairs near the window; the room was painted entirely red.  We sat there in silence for several minutes, ignoring, as best we could, the high pitched hushing and wailing playing from speakers high on the wall behind.  Here we were, fronting life, high and beautiful and shining and serene – and some schwanz was trying to strongarm this vision, this life, into half-mast “art”: a grease-stain on the world.

So be it.  We ignored the art and we looked out the window.  I still have my snapshot of the Picasso canvasses, and all the fascists and the democrats in the world can’t take that away.

If I could change one thing, I would have walked across those spoons. 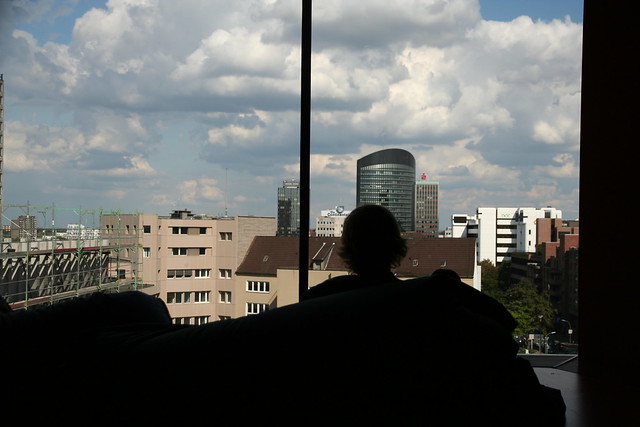