After visiting the Leipzig and the Gose brewery, Matthias was quick to bring Steve and I back to our senses, and back to Dortmund beer.  As any Dortmunder will tell you, this city was once the beer capital of the nation, brewing export and altbier, and producing more barrels than any city in Germany.  But then the Czechs introduced the pilsner style; major breweries like D.U.B. (now D.A.B.) and Brinkhoff’s merged; and economic pressures dampened Dortmund’s beer output at the same time that they crushed the steel and coal industries.  Today one would be forgiven for assuming that “Dortmunder beer” is pilsner, a foreign style.  Kronen, D.A.B., Brinkhoffs, Bergmann, are all famous for their pils (which they make quite well).  For a taste of the Old Dortmund, we went to Hövels. 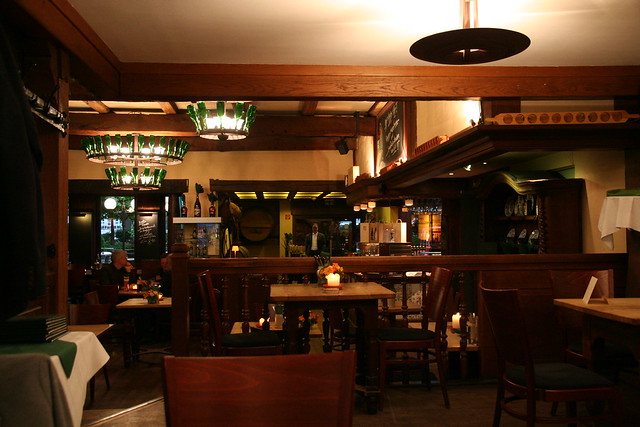 Half-litres of Hövels Original appeared almost as soon as we sat down.  This brew is an altbier, or a German brown ale conditioned for long periods, giving it mellow malts and some of the fruitiest notes you’ll taste in an any ale.  That isn’t to say the Original is sweet – it opens with abundant fruity aromas, but as soon as the first sip passes your palate these are gone – only to reappear in the aftertaste, a fruity flourish.  Malts predominate, with touches of toffee, light hops, and just enough sweetness.  The beer pours an almost cola color.

Steve likened it to an IPA without the bitterness; Matthias said “It’s just that Hövels taste.”

Our appetizers arrived before we’d finished the beers.  I ordered a Dortmunder Salzkuchen (saltcake) mit Zwiebelmett (raw pig meat).  Growing up eating beef on weck in Buffalo, this was pleasantly familiar – but filling.  When the waitress came to ask about our main course, Steve and I wisely decided to split a Westphalian Rosary.  Matthias was bolder, and ordered an entire pig knuckle for himself. 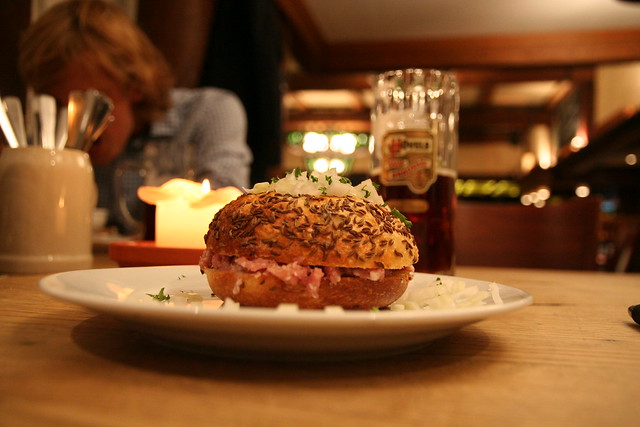 The knuckle tasted as if the pig had been killed only minutes before, and the Hövels mustard was incredibly piquant.  Steve and I demolished the rosary, starting with the tough and rustic sausage wheels, lingering over the sweet and golden potatoes, wedges of manna, and slowing our pace as we hit the kraut, good and hearty, though it could have been more assertive. 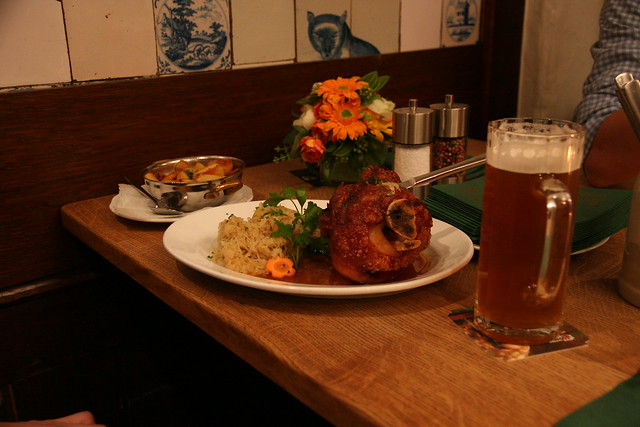 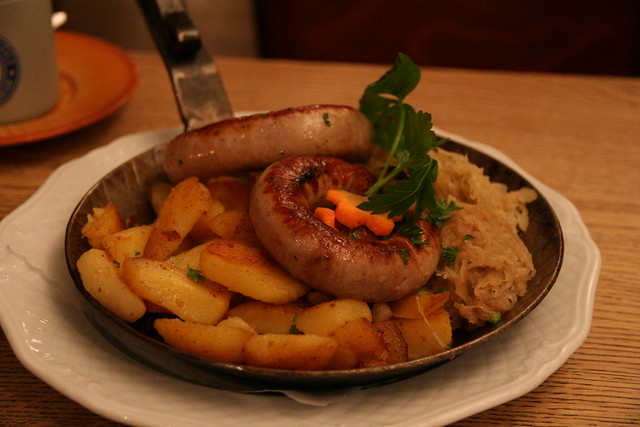 Midway through these meals, we ordered a round of Hövels Zwickelbier, a pale ale with a hue like good local honey.

Steve wasn’t impressed.  “It doesn’t have much profound to say and it doesn’t finish well,” he said.

I thought the Zwickel had a vaguely fecal aroma and a sweet aftertaste – an altogether agreeable beer but not impressive, and perhaps too filling to be paired with raw pig meat and a Westphalian Rosary.

But still, we thirsted.  The brewery wasn’t serving their seasonal beer that night, so with two beers to choose from, we retired to the gravel garden and returned to the Hövels Original.  I left wishing that I’d been able to try the seasonal brew, because with only two beers to choose from – choice met quality in the food more than the brews – I felt like I had little understanding of what holds Hövels together.  The answer might lie where the gastropub’s rustic fare meets the brilliant, if dusty, altbier: the Hövels folks hold Dortmund’s oldest culinary torch, plying well a trade carved out by bombs and washed away in a tide of Czech pilsner.  For visitors to a city sizzling with döner kebab and currywurst and floating on Brinkhoff’s-D.A.B.-Hansa-Kronen pils, the Hövels brauerei is the best place to start looking for the old Westphalia.