I’m not sure how many Dortmunders can say that they left Westfalenstadion pop-eyed in excitement on 23 Aug. after Borussia Dortmund’s knock-kneed season opener against Leverkusen, a sobering 0-2 loss.  Living in Dortmund for two weeks in 2012 and a month in 2014 doesn’t make me a Dortmunder (for one thing, I still speak infantile German), but in the past three days,I’ve tutored German third-graders in math, helped to scrape and paint a Dortmunder’s new apartment, and spent three hours wheeling Dortmund seniors to and from an eis-café: I think that makes me something more than a vacationer, if not a full citizen.  So, wearing a vintage 90s Borussia Dortmund jersey, a BVB scarf, a BVB track jacket, and still damp from a shower in pilsner – an almost-Dortmunder – I left the stadium reeling from the loss,  but riding a strange new regionalistic sports high, and – I admit – smiling.

I grew up in Chef’s Restaurant on game nights surrounded by Toronto Maple Leafs fans; I’ve ridden the subway home with them singing after a Sabres victory, or in silence and foot-shuffling after a loss; I’ve helped pack a New Orleans bar with Bills fans, jeering down the Saints in their hometown; I’ve helped lead the raucous Canisius College C-Block to a D1 basketball tournament run; and I’ve stood with the rowdies at every St. Joe’s-Canisius high school football game since I started as a freshman in 2007.  I’ve never seen anything like Westfalenstadion during a Dortmund game.

The stadium (now called, by some, and even then reluctantly, Signal Iduna Park) holds about 80,000, but nearly 25,000 of these fans stand for the full 90 or more minutes (plus the hour and a half before the game,  which a fan will have to endure to secure a good spot) in the Sudtribune, or “South Bank,” the largest freestanding grandstand in Europe.  More impressive still, they chant throughout the entire game without pause or abatement or even, it seems, breath.

I’m not even sure that I saw Leverkusen’s first goal against Dortmund, a ten-second play so quick and unopposed that it made both teams look like they were running drills.  But even then, the Sudtribune did not fall quiet.  I watched one of the leaders, standing on a platform to my right, look over his shoulder and watch the goal.  Recognition flashed across his face – but there wasn’t even a hiccup in his voice.  He shouted the chant again; the Sudtribune shouted back, leaving grief, a weak emotion, to the rest of the fans.

The gameplay itself was subpar; I’d seen Dortmund play better only a week and a half before, in BVB’s easy 2-0 win over Bayern Munich to snatch the Supercup (noted almost as much for Pierre-Emerick Aubameyang’s bizarre Spiderman celebration, his first such performance in Germany, as for his beautiful header goal), watching in St. Annaberg, Poland.  The first half of the Leverkusen game was pitiful, and though BVB kept greater possession of the ball during the second half, they lacked aggression on offense and let a late-game goal slip that sent fans from the north, east, and west sides of the arena trickling out before the final minutes were up. 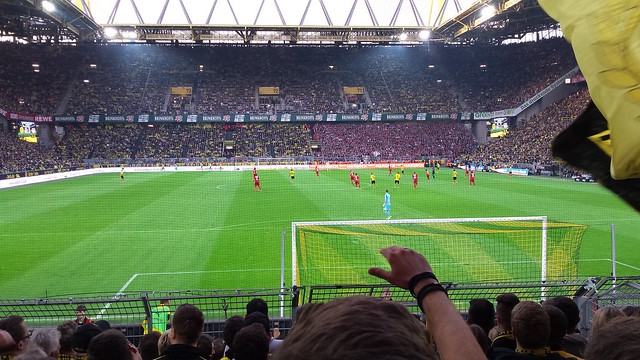 But the Sudtribune was stalwart.  Admittedly, an intoxicated Teuton nearly took off my head for snapping a picture during the gameplay, so I imagine that if anyone tried to leave during those last minutes, he or she would have been chosen as that night’s sacrifice.  Still, we stayed: 25,000 strong, and chanting.

Speaking of the Dortmund chants: I tried my best.  I took “fahrt sie, BVB,” to be “fotze BVB” – something entirely different, I assure you.  But I chanted “fotze” while the rest chanted “fahrt sie,” thinking, “Oh, well.  When in Dortmund…”  My guide (and ticket into the Sudtribune) Leif Ströher, put up with my fumblings without complaint (at least, as far as I could tell).

The more complex chants took me two or three choruses to catch.  I had even more trouble with the rhythm: if you want proof that white people can’t clap, put 25,000 drunken Germans together at a soccer game.  They had enough trouble finding their hands, let alone 2 and 4.

But still, though struggling, I was thrilled – and even more thrilled when an easy chant came up, like “Sha La La” or “Allez.”  Massive flags flapped in front of me, cutting off huge sections of the pitch.  I swayed to the right and left, unbothered, shouting the whole time.

At many points in the game, the Sudtribune fans raise both arms in a wide “V” to accent their chants.  Because of the tight space, though, I could reach up only one hand – and it was at this point, in a moment of reflection, seeing myself from above, one arm raised in an accidental “Heil Hitler” salute, shouting for Dortmund’s blitzkrieg victory over all the forces of international fußball, that I think I peered into the dark place where pride and rage meet.  Looking around me, I was suddenly struck by the Germanness of the faces of the Sudtribune.  I’d seen them before, the sharp jaws and cheekbones, the hard-set eyes.  I’d seen them in history books.

If I had had the space for it, I would have shrugged.  Ah well.  “Borussia für immer!” I shouted.  “Borussia über alles!”  The black and yellow flags flapped and the game played on.

After four minutes of added time, the game was called; Jurgen Klopp walked out to shake Leverkusen coach Roger Schmidt’s hand; and all the BVB players walked over the the Sudtribune, to salute us.  This was the absolute peak of the game for me.  I recalled all the times that Coach Jim Baron led the Canisius Golden Griffs to the C-Block fan section, to thank us – but this, at the close of a crushing start to the 2014-2015 season, was something different.  The players raised their arms to hail us, to join in the old song that we sang for them, saluting us, as we saluted them, saluting the city, saluting all the Borussia players and fans down through the team’s 105-year history.  I could see why Dortmunders claim that their fußball culture is unique, why Dortmunders were dispassionate when the National team won the World Cup – and why other clubs and rival fans corroborate the awesome power of the Borussia Dortmund Sudtribune.