Kiosks in Dortmund are as common as roadside shrines in India.  Some kiosks are walk-in, but most are windows where late-night wanderers buy emergency 5€ cigarettes and beers at prices one-fourth what you’d find in a pub.  A bottle of Brinkhoff’s might be 90 cents; Hövels, 1.10€.  My favorite kiosk has to be the smaller of the two kiosks on the Borsigplatz (colorful part of town where recent immigrants in rubber sandals will offer you any substance a mainstream drug user could want), where, last week, a group of us bought a crate of Hansa pilsner, with an additional four bottles stacked on top, for 11€ – almost a supermarket price.  But, even among gems like these, the Bergmann Kiosk stands above all others. 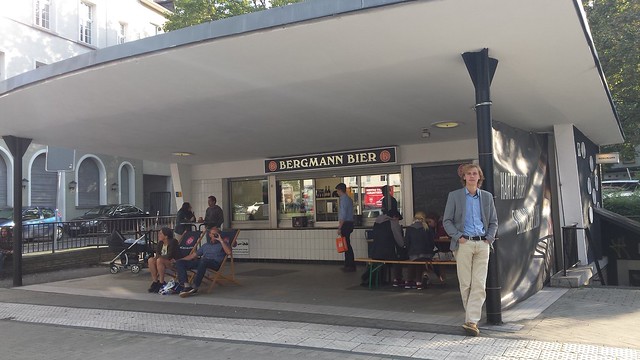 As you might imagine, the Bergmann Kiosk sells only Bermann beer, and nothing else – not newspapers, cigarettes, prophylactics, or lollipops.  This ought to be a downside, but it isn’t.  Because Bergmann doesn’t have its own brewery yet, and currently piggybacks off other breweries outside Dortmund, it isn’t technically a “Dortmunder” beer.  It is a Dortmunder favorite, however, and if the brewery manages to open up shop in the city, it can reclaim its prime spot in the city’s brewing constellation.  Without a brewery to visit, Bergmann-lovers head west to the Kiosk, which, unlike your standard kiosk, sports a wide awning, a cocktail table, two picnic benches, and a pair of lounge chairs looking out at the busy street.  This, my friends, is a Drinkers’ Destination.

As Klaus Grimberg of the Atlantic Times wrote in 2009, Bergmann beer disappeared in 1972, and might have remained a memory had not Thomas Raphael discover the lapsed rights to the brand in the summer of 2005.  Since then the craft brewery has been putting out pilsners alongside traditional Dortmund “export” beers as well as a schwartzbier, a “special” and the top-shelf “Adam” and “1972.”  A first for this blog, I tried them all in one evening.  (As the Germans say: Sauf!)

Now, if you want to repeat my feat, you could find all the Bergmann beers at a supermarket, but I’d advise against it.  Because there isn’t a brauerei open to tours, the epicenter of Bergmann-drinking culture is the Bergmann Kiosk: head there.

After three weeks in Dortmund, I had to start with the pils, and this was a pleasant surprise.  The Bergmann pilsner stands out in Dortmund’s crowded playing field, a sweeter and maltier offering than the Actien brands.  It’s a pleasant break, but perhaps not as satisfying for some as, say, the classic Brinkhoff’s.

Next up was the export.  This brew began as part of Dortmund’s response to the Czech pils, under brewmaster Fritz Brinkhoff.  The export had a higher alcohol content and a more robust flavor; it proved more popuar than its fraternal twin, the Dortmund lagerbier.  Bergmann’s export is a close sibling to the pils, but pours a more honeyed hue – and the added booze, though modest, does help round out the beer and make it a more satisfying quaff.

Feeling dangerous, we ordered the spezial.  This one tastes just a bit darker than the pils  – it has what most would call a classic Bergmann taste, recognizable in the mellow mingling of Gerstenmalz and hops.

Last was the schwarzbier – surprisingly sweet, with a hint of peppermint and something rooty.  As I’ve said elsewhere, European schwarzbiers and IPAs usually surprise me when they fail to land the bitter hop hit of American brews.  I didn’t mind this in the DBB schwarz – the absence of dominant hops allowed the malt flavors to flower, making this one a perfect dessert beer.

After four rounds at the kiosk, Steve, Matthias, and I decided to drop 20€ and buy two specialty bottles, the Adam and the 1972, to drink later that night (after we visited the Hövels Brauerei – Sauf!)  The man in the kiosk window advised us to serve these cool but not chilled, at about the temperature you’d serve most white wines.

The 1972 disappointed all of us, I think, perhaps because of the advertising.  A supposedly “hoppy” Bock, the brewers intended this to recall the autumnal days of the Dortmund coal and steel industry, when a beer like this was “the honest wage after hard work.”

The beer was certainly not bitter, at least not by my standards.  A lighter beer with almost no aroma, it opened with citrus notes that lingered and blossomed into apple and yeast.  This made for a complex taste, but still, nothing stunned us.

With the Adam, brewmasters hoped to reach back even further, to recall the brewers of Middle Ages, who wrestled with wild malts and brewed darker, more bitter beers with higher ABVs.  This one weighed in at 7.5%, about your average IPA’s ABV today.  Sweet, dark, and lightly bitter, all flavors bowed to the malts in this one.  Sebastian was the first to notice the Adam’s biggest surprise: very obvious notes of soy sauce.

“This tastes like 1972 to me,” Steve said.  “Dirty, hoppy, very malty – I wouldn’t drink and drive.”  (Luckily everyone drives stick in Germany – if Steve tried to drive, he only would have rolled downhill into some bushes.)  He went on to list coffee and cigarette butts as subtle influences on the brew.

Matthias, who’d sought out the beer after an avalanche of friends’ recommendations, loved the beer at once.  Ten beers deep at this point (we’d also paused to crack a bottle of Gose that we’d brought back from Leipzig, and have a few vodka shots to wash our tastebuds) I found my usually discrimination palate slightly compromised.

Drinking Bergmann beer is a riposte to the American craft beer drinkers who complain about the stagnation of European brewing.  I’ve spoken to many friends and beer lovers who actually complain about traveling to Europe and being “stuck” with European beer.  I still see their point – while we all love Czech and Dortmund pils, and can raise a Guinness, and down litres of Bavarian weissbier the whole day long, the European brewers, for the most part, are very good at doing one or two things, and doing those things brilliantly.  Innovative?  Daring?  Not so much.  Good luck finding a decent IPA in Central Europe, a nut brown ale outside of England, a Belgian gold anywhere outside of Belgium.

But, as I found in Sligo, at Europe far-western frontier, Irish craft brewers are feeling a new trade wind from America.  Among a field of decent attempts, I found the W.B. (Yeats) IPA at the Swagmann, brewed by Brü, a beer that could compete with America’s best.  And now, in Germany, in what was once the greatest brewing city in all of Europe, I’ve found exciting offerings from a newcomer craft brewer, poised, it seems, to change the face of Dortmund brewing.  Sure, they look to the past for inspiration, but when it comes to beer the past is the best place to start.

To wrap things up, I quite like the DBB pils, as a sweeter and maltier break from the standard offerings – though I probably wouldn’t make it my standby.  I liked the Adam very much – enough to drop another 10€ at the start of an evening, to see what I really think of it.  My favorite overall is the export – sweet, boozy, golden, paired well with meals, and very, very refreshing.  Of course, I wouldn’t mind a schwarzbier for dessert.

I’ll be revisiting these beers soon.  When that day comes, you’ll find me back at the Bergmann Kiosk. 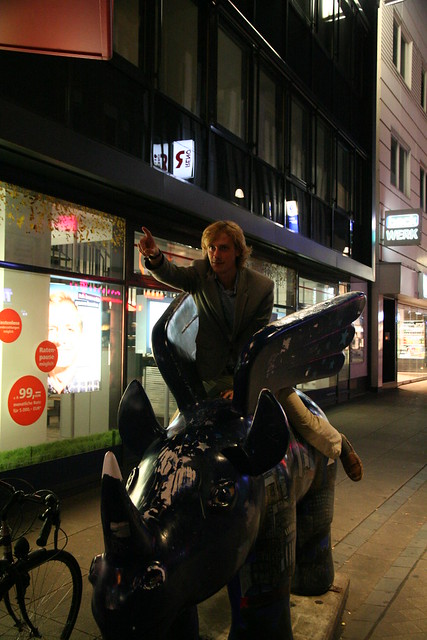 [Above, Steve rides the Sauf Train – in this case, one of the flying rhinos scattered throughout Dortmund.]