I’ve not been able to update my blog since I landed in Edinburgh on Saturday, being too busy dancing Ceilidhs, downing pints, visiting Tom Riddle’s grave, and decorating my flat.  I have several backlogged posts from Germany to put up, so keep a vigilant eye on my RSS feed for posts on Dortmund pilsners and a day trip to Köln.  But in Edinburgh at least, everything seems eclipsed by the Scottish independence referendum.

Thursday, 18 Sept., Scots will vote on whether to split from the UK, a controversy that reaches down to the very mechanism of the referendum: Scots who live abroad will not be able to vote (like the vocally ‘No’ former Manchester United manager Sir Alex Ferguson), while 16 year old Scottish residents will be able to cast their ballot.

From the highlands to the lowlands, a stimulated sense of Anglo-Scottish history is colliding with the wave of nationalism currently sweeping across Europe; Thursday’s vote will be an emotional one, something Scottish First Minister Alex Salmond, of the Scottish National Party, was likely relying upon in his push to lower the voting age.  In Edinburgh, from the Royal Mile to the airport’s arrival gate, you can’t escape the low murmurs: the polls have changed again; the ‘Yes’ votes leads for the first time, by a slim margin.

Walking around Scotland, locals and newcomers alike will notice the ‘Yes’ vote’s footprint first: you can find at least of their modest ‘Yes’ window signs on every block.  The ‘No’ vote is less vocal, which should come as little surprise – one can’t exactly wave a flag to the tune of “I’m-proud-of Scotland-but-given-the-uncertainties-of-an-independent-state-and-semi-divested-economy-as-well-as-a-dual-national-identity-I-can’t-in-good-conscience-vote-for-a-split” – which seems to be the tune most ‘No’ voters are singing, quietly, to themselves.  To put it more simply, I talked with a priest this afternoon who said, “I’d like to vote ‘Yes’, but I don’t think I can.”

As for the polls, savvy Scotts scoff: as my first Edinburgh cab driver said, “Have you ever actually met anyone who was polled?  Course they take polls: everyone in the office, hands up if you want to split: lookit that, ‘Yes’ gains three points.  There’s your news of the day.”

So, Scotland’s future won’t get any clearer until Thursday’s votes are counted – and no matter what way it all shakes out, there will be a great deal of uncertainty for some time to come.  To address some of those issues, the University of Edinburgh on Monday night hosted a referendum debate, as part of Fresher’s Week – a brief, two hour break from the dancing and the drinking.  The Teviot Row Debate Hall was packed – standing room only – as four partisans tapped their fingers at two tables on the stage. 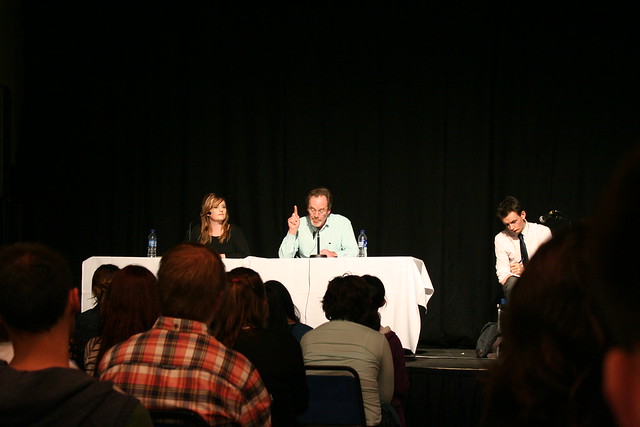 “It’s called in general parlance ‘growing up’, Donald Smith, Director of the Scottish Storytelling Centre, said.  The novelist and historian, arguing for the ‘Yes’ vote, used his time to sketch for his audience a new Scotland – not only independent, but socialist, anti-war, anti-interventionist, anti-nuclear proliferation, and a member of the European Union.

Smith’s co-panelist, Jenny, took a radically different approach: while Smith talked about the fine details, she spoke from person experience, weaving metaphors out of anecdotes from her teaching days, and even dropping a patchwork T.S. Eliot quote: “The end of where we’re going is to arrive where we started and to know it for the first time,” she said.  Their differences didn’t run any deeper than style, though: one surprising thing that both Yes’ers made clear was that if the Westminster parliament had put DevoMax on the table (maximum devolution of economic powers to the Scottish Holyrood parliament) they wouldn’t be voting for independence.  In fact, this seems to be a large enough middle ground for the ‘No’ camp to stand in as well.

There are those in the Yes contingent who – as characterized by both sides in tonight’s debate – paint their faces with the Saltire and go about in bare chests and kilts, shouting for independence.  But a great number, maybe even a majority, want to split because they’re fed up with limited say in a Westminster government that pursues conservative policies – policies Smith often equated with American ass-kissery.  People like Smith see in the referendum not only the chance to “grow up” and take economic responsibility, but to divest the country from a set of values he and other Scots do not share.

All of this goes to show how far next Thursday’s Yes-No vote is from any tangible Yes-No ideological ground.  The ‘Yes’ group draws strength from nationalists, socialists, pacifists, and plenty of Scots who would self-identify with none of those groups.  But, while the ‘Yes’ panelists continually characterized their counterparts across the stage as “fear-mongers,” they were little more than skeptics – skeptics who draw members from those same groups I listed above.

At times it seemed the debate was doomed for lack of common ground (Smith argued for “independence” while the ‘No’ panelists cautioned against “separation”) but I felt throughout that if all four panelists simply listed their cultural and political goals for Scotland in 2015 and beyond, they would agree on most points.  They might not agree on nuclear weaponry, but they’d agree on reforming the economy.  Instead the panelists waged a debate almost exclusively in the realm of the hypothetical, arguing over Scottish identity, potential membership in the EU, the currency question, the relocation of business, mortgage rates, and oi reserves.  None of the four were qualified to do more than speculate wildly on these subjects – and that made them no different from anyone else who has a vote on the 18th.  (Meanwhile, none touched on the implications of the vote outside Scotland and the UK: for example, the fact that Catalonia, the Basque region, Flanders, Padania, Brittany, Venice, and even Transylvania – all regions seeking independence from their parent nations – are watching Scotland; which in turn has fueled rumors in the UK that Russians are funding the Scottish ‘Yes’ vote to destabilize the European project).

If you can’t make up your mind, go, scribble on your ballots,

the MC said, to close the debate.  Surely, Scots who never heard his sage advice will do just that come Thursday.

As both sides have pointed out, the already evident result of the upcoming referendum has been a Scottish engagement in politics and cultural debate on a level unprecedented in our age.  It’s clear that there is nothing at all resembling a united Scottish political agenda or Scottish social program; it’s equally clear that the question of Scottish identity is as easy to unravel as the tight warp and weft of a tartan quilt.

If the Scots vote ‘Yes’, the following year will see fierce debate and serious economic and cultural struggle as the Holyrood parliament navigates the currency question, application to the EU, and management of a suddenly shrunken economy.  But even if the Scots vote ‘No,’ there will be room to grow and to change.  The 2016 amended Scotland bill will give the country the right to set its own income tax; and the buzz around the referendum, no matter the result, might push Westminster to offer devo-max, after all.

Either way, the coming year will see a newly engaged populace debating the direction of their country, and to great extent following that direction as best they can.  And that, after all, is the bedrock of sovereignty.