Edinburgh Turns Orange (And Purple, and a Little Bit Red-White-and-Blue)

Half a block north of the west entrance of the Meadows park in Edinburgh, Scotland, three neon-vested parking officers sit at a table cluttered with radios and handheld printers, staring down into their smartphones.  Students and city workers come here, a small shop called Snax, for a few minutes of hot-roll and haggis bliss before a long working day – although for the parking officers, this day will be longer than any in recent memory, because today, Saturday the 13th of September, five days before the country votes for either independence or unity, 15,000 members of the East Grand Orange Lodge of Scotland, along with friends from England, Wales, and Northern Ireland, have gathered in Edinburgh to show their pride – for the Saltire and the Union Jack.

At twenty minutes to 11 on Saturday morning, 26 buses from all over Great Britain have queued at the Meadows’ entrance, to park closer to the walk’s endpoint on Regent Road below Calton Hill.  They’ve emptied out pipers, drummers, banner-boys and accordionists from 110 lodge bands of the Loyal Orange Institution in Scotland and several thousand sympathetic spectators, all clad in military regalia, orange sashes, dress blues or dandified two-piece Union Jack suits.  Several women wander the park in Queen Elizabeth-style bonnets, carrying homemade crowns on top of shrink-wrapped Bibles.  A man on the bandstand intones patriotic and religious soundbytes, and recites Psalm 118, accidentally eschewing the Anglican King James translation for the New International Version: “This is the day the Lord has made; let us rejoice and be glad in it.”  In less than half an hour, the 15,000-person crowd will proceed through Edinburgh’s busiest streets, past its most venerable institutions, to finish just past the Scottish Parliament at Holyrood, in the most vocal demonstration in support of the union to date.

“The union movement has been criticized for not being passionate enough,” said Edward Stevenson, grand master of the Grand Orange Lodge of Ireland, and the main speaker before the march.  Indeed, members of the unionist Better Together campaign speak most often about economic insecurity and unresolved questions about currency and membership in the European Union should Scots vote for independence, mentioning dual identity or British pride only as an afterthought.  Even unionist stickers convey British restraint, proclaiming “NO,” in block capitals, and beneath this, in subscript, “thanks.”

“Well,” said Stevenson, “we’ve got some passion for you today.”

The 15,000 fell into marching formation, facing a flag-waving crowd that stretched along both sides of the entire two mile route from the Meadows past the Scottish Parliament and Holyrood Palace. 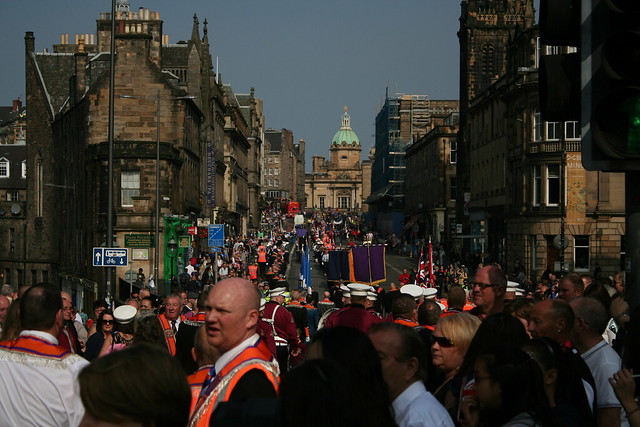 The demonstration in Edinburgh has highlighted (in bright, neon orange) a division that cuts across both sides of the Scottish referendum debate – a division that both sides, until today, were successful at ignoring.  Leading up to the vote, public forums and literature drops have kept the discussion in the realm of economic speculation and foreign and domestic policy, where the sides have been held in stalemate.  Today the Edinburgh Orange March dragged that debate back into the ancient realm of national identity and religious division, leaving unease, and thousands of stickers, in its wake.

This is a claim the Protestant pilgrims in Edinburgh vehemently denied.  Behind Adam, members of the Apprentice Boys of Derry, a group associated with the Orange Order, were drinking Bulmers and Budweiser outside Doctors No. 32, on the corner of Forrest and Teviot Place, one of the few bars in the city with a “No” sign in the front window.  It was 11:20 a.m.; lodge bands would keep marching past the pub for the next two hours. 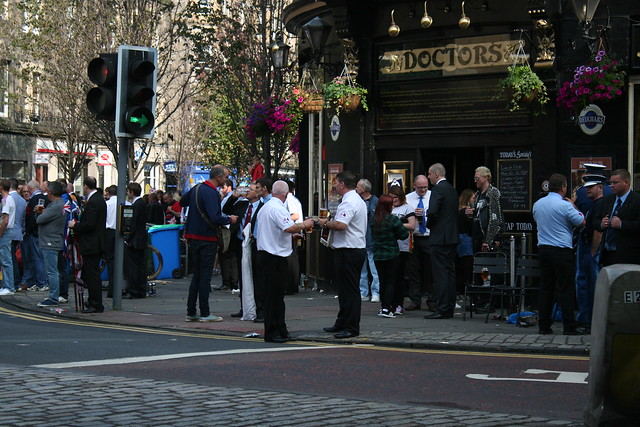 “My grandfather fought in two wars, James Sincleir,” said Alexander Mitchell Smith, a member of the Apprentice Boys.  “My father was in the royal artillery.  Two brothers in the Highlanders [Regiments].  I was in the [Royal] Pioneer Corps.”

“My whole family fought for the union,” he said.  “I want to maintain that.”

But the Orange Order isn’t just a veterans’ club: it’s an avowedly religious fraternity, founded in 1795 as a quasi-military group to counter Irish Catholics – and its been inextricably tied to religious violence in the British Isles ever since.  July is the traditional time for the Orange walks, which see their biggest attendance in Protestant and working class communities in Glasgow and Northern Ireland, leading up to 12 July, the anniversary of William of Orange’s victory over the Catholic King James II in 1690, though the Order often uses walks to commemorate other events in Protestant Anglo-Celtic history.

The walks have always been controversial; they’ve sometimes been bloody; but never have they come at a time when the stakes are so high for Scotland.

A 12 year-old Glasgow girl was hospitalized in July after being struck by a glass bottle at an Orange March.  About 4,500 took part in the demonstration that day, according to a BBC report.  A Police Scotland Press Office report released late Saturday afternoon confirmed that 15,000 marchers participated – the largest turnout since 50,000 “Orangemen” met in Edinburgh in 1951, following heavy losses to membership during the Second World War.  Some of the busiest streets here in Edinburgh – like George IV Bridge, Market Street, and Abbeyhill – were closed for the afternoon, while police warned publicans and shopkeepers on the Royal Mile, one of the city’s biggest tourist districts, to be on guard for violence from fans of the Hibernian and Rangers football teams – Edinburgh’s Catholic club and Glasgow’s Protestant club, respectively.

Ian Wilson, convener of the Lodge’s referendum strategy group told the Guardian’s Libby Brooks that the Order is not concerned with pushing Catholics from the loyalist cause.  But more mainstream unionists – like the moderate Better Together campaign – aren’t resting easy.  Since the early 20th century Catholics in Scotland have made up a large part of the Labour vote, a bloc that now swings toward independence.

There were no violent outbursts Saturday, but any Scot in hearing distance would have recognized the tune of “Bill Boys,” a song of one of the old Glasgow razor gangs, still sung by Rangers football fans.

“We’re up to our knees in Fenian blood,” the lyrics go, “surrender or you’ll die.”

After playing the old Catholic-killing tune, Orange pipers, some as young as seven or eight, played the “Famine Song,” another Rangers’ favorite.

“Thousands in Glasgow alone, from Ireland they came, brought us nothing but trouble and shame: Well the famine is over, why don’t they go home?”

These tensions played out under the surface, much like the neck tattoos that rose up out of the marchers’ starched white collars.  Only a few Orangemen were bold enough to sing along, but the tunes alone did something to rattle the opinion, prevalent in Edinburgh, that Scotland is more liberal than England, and immune to the wave of nationalism and xenophobia now sweeping the Continent.  This past week, Socialists unionists and Socialist republicans alike passed out leaflets to students at the University of Edinburgh, operating from tables on opposite sides of George Square.  No matter Thursday’s outcome, activists on both sides have been calling for the same things: an expanded health service, commitment to public education, the removal of nuclear weapons from Scottish waters, a less interventionist foreign policy, and ethnic tolerance.

“We don’t have foreigners in Scotland,” Adam told me – “We have ‘people from other countries’.”

This may be the rule in much of Scotland, but Saturday served as counterpoint; on Canongate, near Holyrood, a glassy-eyed Orangeman paused on the sidewalk to press his palms together and give a low bow to a trio of Japanese tourists.

One University of Edinburgh graduate working in the medical field expressed unease on Friday about the next day’s demonstrations – though he, like the members of the Order, plans to vote “No” on Thursday.

“We know what to expect [in the UK],” he said.  “I think there’s too much risk involved.  There’s risk in the [Scottish National Party] – they make assumptions, about the economy, about the EU.”

He characterized SNP arguments as “misplaced confidence.”  “We are making a decision for life here, not for a term.”

The recent graduate asked to remain anonymous – a sentiment shared by many on the fringes of the Better Together campaign, something that makes the polls, currently within eight points, highly suspect: the majority of unionists, unlike the Orangemen, just aren’t inclined to wave flags.  Before Saturday, an Edinburgh pedestrian could count six “Yes” stickers for every one “No.”

Mainstream republicans kept even further afield of Saturday’s demonstration than did the mainstream unionists, seeing nothing to be gained by a counter-play.  If republicans moved in the sea of orange, they went undercover; there were no signs, chants, or demonstrations.  Here and there, however, one could find on windows or on temporary road signs stickers saying “neither King nor Kaiser,” and bearing the emblem of the James Connolly Society of Scotland, a group dedicated to the socialist republic envisioned by the martyr of Ireland’s Easter Rising.

As with Farage today, so with Orange march in central Edinburgh tomorrow. Best for Yes folk to stay away. Lots of campaign events to attend!

By the end of the walk several Orange Order bass drum heads had been thumped thin, warped and mottled and ready to burst through.  The marchers hit the “Dispersal Point” and did just that, wandering off to grab a pint on the Mile before taking one of the scores of buses back home.

“The event passed off peacefully without incident and with no arrests,” the Police Scotland Press Office release said.  Still, stations as far as Leonard St. in Newington were almost empty, with most of the officers still patrolling the parade routes and popular pubs around the city center at 4:15 p.m. 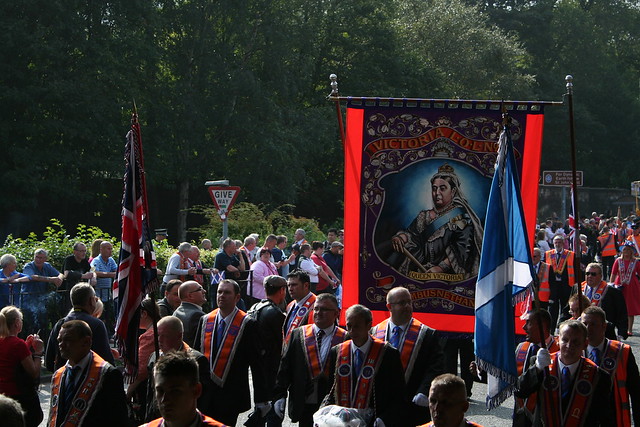 But only one hour after the parade the city looks very much as it did the day before.  The streets are open again and busy with commerce; the only crowds left are assembled around street performers, a boy playing slide guitar, a bagpiper, a man juggling unicycles.  Six iPhones snap outside the Elephant House, birthplace of Harry Potter.

Meanwhile, in a quiet corner of the city not far from the path of the afternoon’s tumult, on a steep cobbled footpath linking Drummond Street and Pleasance, an empty kiosk sits looking up to King Arthur’s seat.  It is decorated with ornate painted “Ayes” and “Yeses,” and quotes from Scottish republicans.

One in small – and, ironically, orange – print, reads, “It’s our chance to invent not just a new country, but a new way of being a country.”

For Orangemen like Alexander Mitchell Smith, this might be the most concerning statement of all.  But for Rory MacKinnon, an Edinburgh local walking just south of George Square that evening, messages like this articulate his deepest hopes, while the march, though louder, was little more than an anachronism.

“It’s a small group of people that have a very specific set of beliefs.  It’s a sort of old fashioned thing that’s dying out, slowly,” he said.  “It’s about letting them have their little spasm.”

Things like the afternoon’s Orange March only make people like MacKinnon more eager to count the votes.

“There’s a lot of anxiety about it,” he said.  “There’s so much at stake that it’s getting a little fraught.  We’re ready for it to be over.”

The sun had just touched the tops of the trees behind him, in the square, limning the green leaves in gold.  It was one of the last nights of a lovely Scottish summer – the air was already autumnal, but the sun still seemed to linger in August.  Before moving on MacKinnon took off his grey hoodie, revealing a shirt that said, simply and quietly: “Yes.” 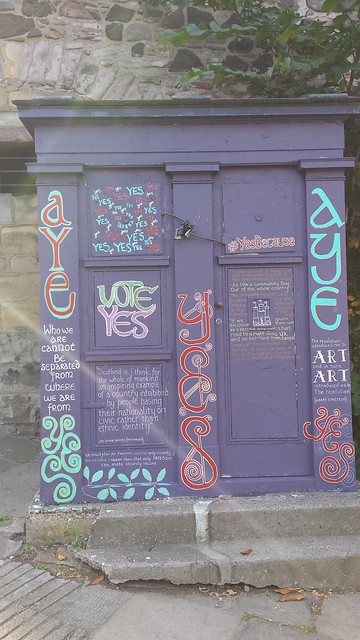 3 responses to “Edinburgh Turns Orange (And Purple, and a Little Bit Red-White-and-Blue)”