Edinburgh’s Christmas (or, how I finally found out what a ‘Hot Toddy’ actually means)

Edinburgh is a multicultural city, a cosmopolis, one of the great European capitols.  I often pause around three o’clock on a clear day to catch the sun paint the minaret of the Central Mosque across Potterrow from George Square in brilliant amber and warm beige (and later, I might head to their kitchen for £5 curry).  Friends have reported spending time at a Zen Buddhist priory by the beach at Portobello; and to walk down Princes Street is to hear the pleasant discord of Scots slang canting off rapid Mandarin babble, peppered with Americanisms, colored by the sound of a Zulu choir, and a man playing the sitar (on Sundays) or devilish blues git-fiddle picking (on Fridays).  I compare this with my hometown, Buffalo, home to an overwhelming German-Irish-Italian majority, a vast contingent of African American Protestants, and defined by the family names of its early German and English high-church worshipers.  Buffalo has an old and established Jewish population, of course, and a growing Muslim population – but we don’t yet have Edinburgh’s cosmopolitan culture, nor will we ever have Edinburgh’s history of atheist, deist, or free-thinker thought, dating back to the Scottish Enlightenment.  But in Buffalo, even nominally Christian organizations carefully craft inoffensive ‘holiday’ communications, while the bastions of capitalism swelling to their greatest annual girth proudly plop Santas in the hearts of their consumption-temples, without ever using the word “Christmas.”

As an American, then, I was surprised to find, on Edinburgh’s commercial artery of Princes Street, spotlit signs heralding the all-encompassing “Edinburgh’s Christmas.”  The University long ago established Edinburgh as one of the capitols of the secular world (if not yet the capitol of an independent country) but secular or no, the one thing a Scot’s Scot will never be is PC.  Scots cherish their Christmas traditions (one of which is the hot apple toddy – more on that later).  More importantly: absolutely everyone is invited to their party. 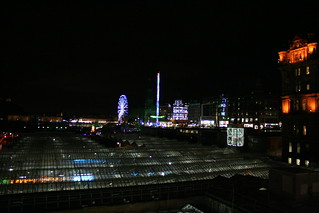 There are two “Christmas Markets” in Edinburgh.  The larger is the “European Market” stretching from the Mound to the Walter Scott Monument and down into Princes Street gardens.

My childhood as far as the Christmas season is concerned could be viewed as a history of the encroachment of the advertisements, carols, and even bowls of wrapped peppermint candies further and further into November.  Traditionally we’ve drawn our line in the snow at Thanksgiving: it’s the last bastion against all things Christmas, and the  ostensibly autumnal celebration is in a way a feast to fortify us for the long cold slog to December 24th.  We shriek in outrage when a radio station or a mall (see the near-unanimously negative posts on the Buffalo Walden Galleria’s Facebook page) tries to take Thanksgiving from us – although each year, it seems, as more and more of us “buy” into the Black Friday Season, we’re pulled a step closer to admitting that we’ve lost the fight, that Black Friday is close to eclipsing Thanksgiving as a holiday.

The Scots aren’t burdened with Thanksgiving, and as such no one protested when the Christmas Markets opened on Friday the 21st.  That night a friend and I were engaged in the project of drinking our way up (and back down) Teviot Place, the UK’s first purpose-built student union, which was that weekend celebrating its 125th birthday.  This feat involved visiting all six of the building’s bars, twice.  As such, I arrived at the Market on the Mound rather late that Saturday evening.

The place was packed, but I didn’t have to fight my way to the stall-fronts to look at the wares – dazzling glazed pottery, Scandinavian furs, Lithuanian ceramics, cured meats and cheeses, fountains of chocolate – the way I’ve fought frumptious Cheektowaga matrons in the Walden Galleria.

Like the Market on the Mound, the St. Andrew’s Square Market offers hot drinks at the “Monument Bar,” a warmed wooden shack surrounding the base of the Melville Monument.  To get to this, visitors have to cross a bridge raised above a circular skating rink, a sort of ice-moat around the bar.  Still lively but a bit quieter than the Mound, the St. Andrew’s shops sell more local goods compared with the Mound’s continental fare (this section is technically called the “Scottish Market”).  Fresh seafood is on sale daily – but I’d check out the breweries, particularly the Strathearn Distillery, so new that they’re only selling gin at this point (and the gins are remarkably good).

I thought my Christmas shopping was done – until the Market showed me that I was wrong.  It’s dangerous that way – it offers too many gracenotes to put on gifts – but the extra trips mean extra toddies.  I’m always sure to get a bratwurst or a pork steak from the Germans, and after that some churros or fresh made-to-order crepes.

As for the toddies and mulled drinks, the sheer variety was at first overwhelming, but three weeks of Market visits I’m sure I’ll try them all.  The classic hot apple toddy will never disappoint – the mulled wines and the toffee toddy are pleasant but sometimes oversweet – and the best beverage so far is the Bavarian mulled beer, available at a tiny shack between the ice rink and the bathroom complex.  All are at their best when almost too hot to drink.

And, toddy in hand, leaning over the plexiglas boards or looking down at the skating rink on the Mound from the heated cabinesque toddy bar above, as the crowds buy cheese and furs and dried spiced fruits to hang, I’m getting used to the different pace of Christmas over here.  I missed Thanksgiving, of course (though I spent it reading Henry Adams over a scrumpy in Shakespeare’s pub before seeing the Scottish Chamber Orchestra perform Handel’s Messiah in Usher Hall) – and part of me even missed the crush of Black Friday, the relished misanthropy of my days working as a watch salesman in the galleria, shoving small children from my path, hip checking on the upper level, vulturing a seat in the food court – the whole thing, Thanksgiving followed by Black Friday, and then four weeks to the sublimity of Christmas a kind of emotional sforzando-piano-crescendo.  Christmas is not a dramatic experience over here – it’s a season, in which to marinate.  I’ll be well seasoned, then, by the time I get home. 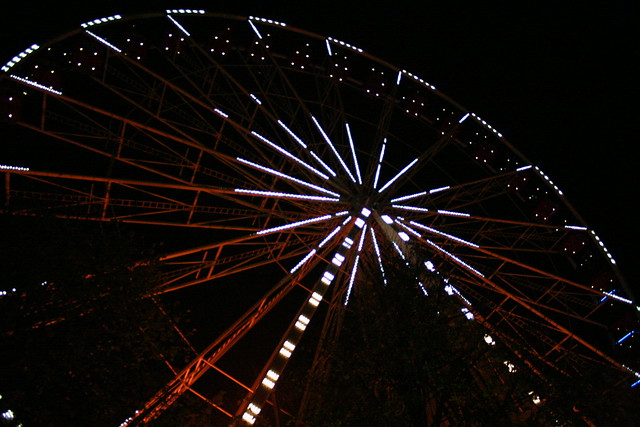