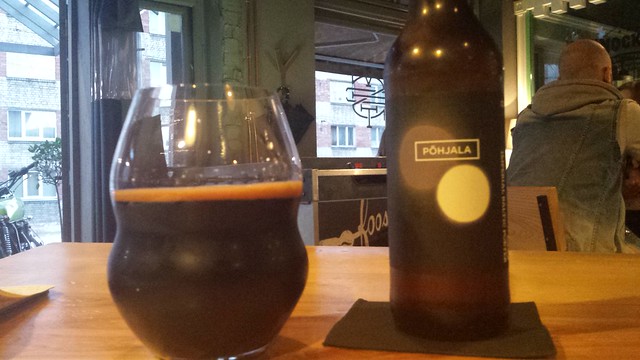 I found Öö at Vest, about a 20 minute walk from my hotel, the Tallinik.  I knew I couldn’t go wrong with the craft beer selection here – the place is a craft kitchen and coffee shop catering to polite bikers, foosball players, even people seeking a haircut from the pierced and tatted in-house “Kockout” barbers (shuttered by the time I rolled in, a little before 10).  These Estonian craft brewers are of a type popping up like mushrooms throughout Europe – young, inventive, raised on the best of the continent’s unimaginably old and often monk-affiliated brews but enamored with American-style inventiveness and derring-do – and, usually, American hops (see P’s India Pale Ale and San Diego Session IPA).  When Europeans follow American brewers into new experiments, the results are often actually a return – back to the days of high medievally ABVs and big tastes for barons, Vikings, etc.  Thus Öö offers “An Imperial Baltic Porter as dark as the Estonian winter nights. Strong enough to keep you warm through the cold evenings.”  Öö indeed.

Mixing malts – Pale ale, Munich, Carafa II Special, Special B, Chocolate malt, Crystal 300, Demerara sugar, according to their website – makes this one darkly complex, though you might not notice it at first: in the initial sips African-style bitter coffee notes will dominate only to be shocked into submission by a thick, rye, kvass-like sweetness.  And then of course there’s the booze taste, assertive, warming, cheeky.  Some might find it as unpleasantly boozy as some of the crasser Scotch ales – but the burnt-sugar body helps with this.  As bold as North Coast’s Old Rasputin (though not as well balanced) this hits the chocolate, toffee, smoke, and currant notes of some of the best Imperial porters, though you might be too pleasantly intoxicated (by the flavor, the flavor) to notice them without trying.  Served in a corpulent little snifter, this one’s a postprandial tipple for sure.

After leaving Vest, Riga’s hippest coffeeshop/biker bar/craft kitchen/barber’s, I found a little below-street-level shop selling beers and liquors in the front and pouring pints for patrons in a back room (sort of like the new tasting room at Buffalo’s Hertel Ave. Village Beer Merchant, perhaps) – it was well after 10, and the woman behind the counter agreed to sell me the bottle, only if I “quickly bag, bag quickly.”  I chose the older (brewing since 1763) Valmiermuža as a comedown from Vest’s powerful Pohjala – and it was exactly that.  At about half the ABV and half the heaviness, it delivered the dark rye malts I’d come (…minutes before) to love in Baltic porters, without Pohjala’s formidable kvass-like sweetness.

Gaišais Speciãlais, Bauskas Alus – 4.8% ABV, €1.35 (shop price) (Latvia) Bauskas Alus have been brewing since 1981, and came to my attention recommended by a Vecrīga (Old Riga) liquor store clerk as a possible substitute for the Brengulis I was seeking.  The Gaišais Specialais pours a rich honey color and smells slightly more of yeast than it tastes – subtler in taste than, say, some of the American saisons I’m used to – though the yeast backbone adds interest to the lager malt body, making a solid beer, remarkable if one’s remark is something like, “Hmm … quite good.”  It would pair well with potatoes and sausage, with Latvia’s sweet kraut, for light afternoon sipping during a summer hailstorm. Tumšais Speciãlais, Bauskas Alus – 5.5% ABV, €1.35 (shop price) I prefer this “dark special” to its lighter kin.  The tumšais pours a cola color and with a cola-malt sweetness – surprisingly light drinking for a dark beer, with a palatable but punch-packing ABV.  Barley malt, classic continental hops, and cask flavors wrestle it out as you sip, but the quiet riot mellows sweetly by the time you’ve swallowed.  A nice alternative to a pils or wheat beer to pair with your classic Baltic desu un kartupeļiem fare. Rīgas Black Balsam and Black Balsam Currant – 45-30% ABV, €1.99 (.04 L) How I do love the allegedly medicinal liquers of continental Europe.  Raised with the hazy conviction that whiskey mixed with black tea and honey is a cure for just about any ailment, I was never a stranger to the more shamanistic applications of alcohol, but the Irish flu shot just doesn’t hold the same mystic interest as, for example, Kräuterlikör, which our Deutsche Mother Brigitte gave to Steve, Matthias and I a year ago, while Steve suffered some ailment of Dostoevskian obscurity and seriousness. Riga’s Black Balsam is roundly maligned on some travel forums – some say locals “inflict” it on travelers – but people here actually seem to like it enough to have preferences between the varieties, and while they rarely drink it straight, the currant variety is popular in cocktails.  Pure vodka mixed with an esoteric concoction of some two dozen herbs, roots, and oils, Black Balsam is so fresh you might feel you’ve actually been chewing on the plants.  “[E]xceptionally smooth and velvety on the palate,” the website says – which is certainly misleading.  The liquor smells powerfully of anise, and linden and valerian will emerge as you a take a sip, which will be velvety, if you can imagine someone taking an herb- and vodka-soaked strip of velvet and scrubbing your throat with it.  To it’s credit, it’s not at all foul – just strong – and one does feel a bit better after indulging in high noon tipple, particularly after a 2 a.m. bus ride back from Salacgrīva, head still pounding from Camo & Krooked’s drum-and-base assault.  Mixed with coffee, it’s even better, a surprising treat for fans of the Irish coffee (whiskey, not Bailey’s) with the herbal flavors still cutting through even the strongest brew and making you feel better about drinking, maybe, in the forenoon.  It makes on think of Dylan Thomas and Louis MacNeice sitting in a parlor with their slippers on. Sweeter, lighter on the ABV, and with a less obviously herbal character, Balsam makers marker the “Currant” variety to Riga’s youngsters, hoping to hook another generation on the tipple.  Infinitely more drinkable, RBBC is good enough to enjoy on its own, especially if you’re a bunch of degenerates from the British press trying to amuse yourselves on the 1.5 bus ride from Riga to Salacgrīva. I’m told it’s also good in cocktails.

This one came highly recommended, and it was the only beer I actively sought, rather than stumbled upon.  It took me until noon on Sunday to find it – it was at a little shop called the “Alus Stacija” on the Marijas iela, selling peanuts, beef jerkies, and ales in many sizes, from .3L to a full 1L.  Bar stools seemed unused – patrons stood around three weather-beater barrels outside the shop, throwing back their pints at a remarkable rate.  The anticipated ale did not disappoint, though it was the sweetest yet – clearly this is characteristic to the region, and the Brengulu was an outstanding example.  As some readers might have noticed, I have a strong bias for American style IPAs, and anything hop-heavy: the Baltic beers were nothing like this, yet I didn’t dream of high IBUs and hop-cones once the entire trip.