On 6 April Foundlings Press unveiled a new website and announced a publishing collaboration with The Public: The Public Books. This historic joint venture — which brings together Buffalo’s hottest new publisher with the region’s premier weekly source of news, arts, and commentary — is both an imprint of Foundlings Press and the publishing arm of The Public, producing full-length books on culture, economic policy, local history, and the arts. 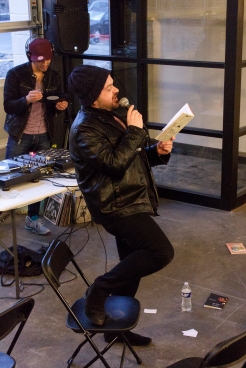 Justin Karcher reads poetry from his forthcoming collection, Those Who Favor Fire, Those Who Pray For Fire Bruce Fisher discusses the genesis of his book, and various economic/policy issues shared by Rust Belt and Great Lakes cities.

In a J. Peterman collarless chambray shirt and a brown corduroy vest, I tried to cobble together a costume appropriate for our fickle April weather.

The Public Books launch coincided with the release of the imprint’s first title, Bruce Fisher’s Where The Streets Are Paved With Rust: Essays From America’s Broken Heartland, Vol. 1. The release party featured poetry from Justin Karcher, music from DJs Shane and Tone, and remarks from Bruce Fisher — and also offered guests an advance look at the new Community Beer Works Brewery at 520 Seventh St. in the city’s Lower West Side.

Copies of the book are available for purchase at Buffalo’s Talking Leaves and directly from FoundlingsPress.com.